FacebookTwitterPinterestLinkedIn
Now the mayor of Amarillo, Texas, is battling a rare form of blood cancer while coordinating her city’s response to Covid-19, cases of which spiked in recent weeks at a local food plant. Because she is immunosuppressed from radiation treatment for her cancer and considered to be at higher risk of serious complications if she contracts the coronavirus, Nelson has spent much of the last two months working from home.
“No one expects to be on a cancer journey, and I’m in my 40s, so I’m not in the normal Covid high-risk age range, but it has given me a very empathetic perspective to someone who is,” Nelson told CNN in a virtual interview.
That empathy, combined with her no-nonsense leadership style, is coming into play as she tries to manage a Covid-19 surge in her city right now.
Amarillo is operating at Coronavirus Level Red, the highest alert level, which indicates widespread confirmed cases in the city — due largely to an outbreak at the Tyson food plant there. She talks openly about the challenge of knowing her residents are working at a place that could make them, and their families, extremely sick. But the plant is considered critical infrastructure, and President Donald Trump has ordered them to remain open.
Read More
“Because they’re critical and they cannot close, they continued working, and they work side-by-side to do their jobs. But also just the nature of any manufacturing, any large employer where you have thousands of employees showing up on certain shift times, they walk through the hallways together, they change in the same locker rooms together, they eat during their breaks or during lunch hour, they eat in the same cafeteria,” Nelson said.
She added, “Even in the personal conversations that I’ve had with employees who work at the plants, they feel the tension, too. And I don’t know that there’s a perfect way to balance it, but to just acknowledge that it exists and to recognize that personal health has to be the top priority, and after that, we work on keeping the plants open.”
In a statement to CNN on Friday, Tyson said its “top priority is the health and safety of our team members, their families and our communities.” The company said it has instituted “a host of protective steps that meet or exceed” Centers for Disease Control and Prevention and Occupational Safety and Health Administration guidance, including installing barriers between workstations and in break rooms, setting up outdoor tents for additional break space and staggering start times.
Though Amarillo received 3,500 coronavirus tests in one day because of the surge, Nelson said they still need more.
“I don’t think any mayor feels like they have the tests that they need, because ideally I would be able to test all of my citizens every week, and we would be able to strategize based on those test results who can go to work safely, who can go to school safely. So we definitely need more testing supplies. That being said, based on the testing supplies that I know are available on a national basis, I do feel like our state government and the federal government have been very responsive to the outbreak here in Amarillo,” Nelson said. “We’re a hotspot. We’ve been hit hard, and we needed those resources, and they’re still coming to us.”

Drastic change is like ‘death to life as we know it’

Nelson is acutely attuned to the way drastic, unexpected change that came with Covid-19 is affecting her residents’ mental health.
While families across the country are experiencing intense pain from losing loved ones to the virus, she believes people who are lucky enough to avoid that are still grieving in a different way — for society and life before the pandemic.
“We’ve had a death to life as we know it, and now we have to pivot and be resilient. We have to recognize the emotional and the mental health effect that that has on us,” she said.
She launched an awareness campaign in Amarillo, partnering with a local television station to try to make people who never sought emotional help aware of local resources available to them.
“The anxieties that weave all through those things can’t just be separated out into a spreadsheet or a diagram that you can — a decision tree that you can say, ‘This is the right thing to do,'” she added. 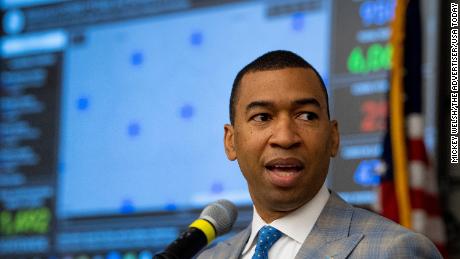 Southern states could get hit by spike in Covid-19 cases, study predicts
Covid-19-related anxiety is hardly just an adult phenomenon, and Nelson has had regular virtual sessions with children.
Emerson, a kindergartner, asked what kids can do to protect themselves.
“It is OK to be scared and it is okay to ask questions about what you need to do to protect yourself, but I want to reassure you that a lot of people are working to keep our city safe. Even if you get sick, it’s going to be OK. A lot of doctors in our city have been studying this and they’re learning a lot,” Nelson replied to Emerson in that virtual chat.
Nelson had the luxury of being able to run for mayor of Amarillo as neither a Republican nor a Democrat — the tradition of the city — which frees her up to step back from politics and speak out on the dangers she sees coming out of Washington.
“We would never take our grief into politics, but that’s where we are now. It makes for a very difficult environment to have conversations about how people are feeling,” she warned.
“I want our leaders to lead us as people, not as politicians. I want them to lead us as if they’re leading families who are worried about mortgage payments and keeping the doors open on their businesses and making their payroll for their small businesses. I don’t want them to lead off of agendas or party lines,” she argued, with an understanding in her voice that what she is asking for now is a bit of a pipe dream. 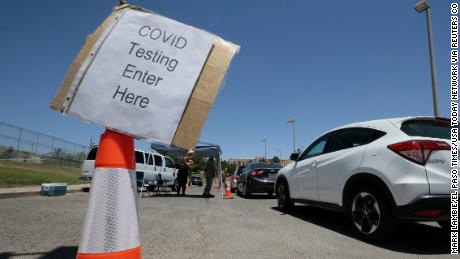 Texas is one of the most aggressive states in the nation when it comes to reopening the economy and society as a whole, which Nelson said she is fine with, despite her Texas panhandle city becoming a Covid-19 hotspot.
“Texas is a big state and there’s a lot of geography to make decisions around with regard to our special situation because of these meat packing plants. I think it would have been the wrong decision to hold the entire state back just because of our county,” she said.
Amarillo is reopening its businesses, too — even now.
“Well, it’s not a light burden,” Nelson remarked about the move to reopen.
“I think as a leader, it’s never been that simple for me. It’s a multifaceted issue. As I’ve asked people to stay home, I’ve known I was asking businesses to close their doors, and that meant they weren’t going to be able to make mortgage payments. It meant that they were maybe going to be, if they’re food insecure, they were going to worry about eating through all the food they had in their pantry and not being able to go to the grocery store and buy more food. There’s so many facets to it. It’s not just, ‘Should we stay in so we don’t catch the virus?'” she said.
Gov. Greg Abbott this week announced that a handful of counties, including two that encompass Amarillo, would delay Phase Two of the reopening process. Despite the city already loosening some restrictions, Nelson noted that there are local businesses choosing to stay closed.
“We do value having the right to make those choices as individuals. That’s a very American thing. I think in my city, Amarilloans have done a responsible job of that. Many businesses that watched our numbers and said,’We’re not ready to open’ even though statewide they had the ability to open, they chose not to. I think a lot of customers are doing the same,” Nelson said.

Nelson started an aggressive social media campaign when her city closed down with the hashtags “ALLinAmarillo,” “ALLinTogether,” to encourage people to understand that if they go “all in” they can flatten the curve and protect hospital capacity.
“We needed to message that and convince people that this is a new form of citizenship. It’s not something that we as Americans or Texans or Amarilloans have ever had to see as being a good neighbor, but going all in means we are all in on taking care of each other and doing whatever is required during this unique and challenging time to keep our city safe,” she explained. 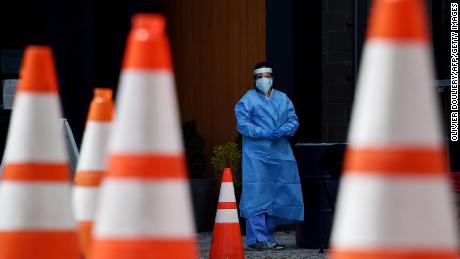 Drug touted by Trump as Covid-19 treatment linked to a greater risk of death, study finds
It caught on — with people not only posting on social media but also putting signs in their windows and on their front lawns.
Now, she posts videos of residents encouraging one another to wear masks and maintain social distance.
“We’ve used the tagline, ‘I’ll wear one for you, if you’ll wear one for me’ because truly it is a new form of citizenship that you would consider others and the needs of others above your own comfort, whether that’s vanity of not wearing a mask or even just the discomfort of having your nose and mouth covered,” Nelson said.
“I think the people in Amarillo know that stopping the spread of this disease most depends on the choices we make as individuals,” she added.

Mom of three, working from home

Because she is immunosuppressed from radiation treatment for her cancer, Nelson has spent much of the last two months working from home and is facing challenges many working parents can relate to these days. During one of her virtual press conferences, her daughter was in the next room taking a remote ballet class, and her son was in another room taking trombone lessons.
“All of that’s going on in the background, the trombone playing, the ballet music, and I’m having to answer tough questions about how the city is responding to keep people safe during a worldwide pandemic. And I thought, ‘Wow, I hope I never forget this moment because this is kind of quintessential what it’s about,'” recalled Nelson.
The Amarillo mayor credits her family, especially her husband, and her faith for helping her get by.
“You don’t live your life everyday like it has an end to it, but a cancer diagnosis will change that fast. And then you bring on something like this Covid and it just really has given our family the gift of savoring time together and recognizing that the relationships we have are important and we want to be investing in them and taking care of each other,” Nelson said.
This story has been updated with a statement from Tyson.