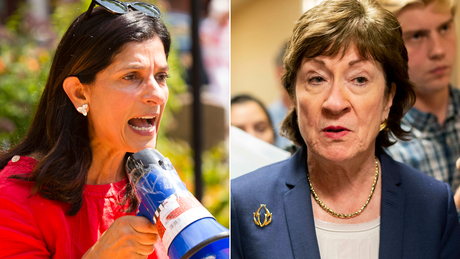 Gideon touted her endorsements from groups supporting abortion rights like NARAL Pro-Choice America and Planned Parenthood Action and publicly questioned whether Collins still believed that Kavanaugh viewed Roe v. Wade, the landmark 1973 decision in which the court ruled that the Constitution protects a pregnant woman’s right to choose to have an abortion, as “settled law.”
In a video conversation with NARAL Pro-Choice America President Ilyse Hogue, Gideon charged that Kavanaugh “did the exact opposite of what Susan Collins professed over and over again that she was sure that he would do — and that is respecting the precedent of Roe v. Wade.”
“We are still very much in danger in terms of reproductive health care and access to that for all people in this country,” she added.
Read More
The Louisiana law required doctors who perform abortions to have “admitting privileges” at a nearby hospital. Chief Justice John Roberts sided with the four liberal justices because of Supreme Court precedent, emphasizing that the Louisiana law was identical to a credentialing requirement in a Texas statute invalidated by the court’s 2016 ruling in the case of Whole Woman’s Health v. Hellerstedt. Kavanaugh dissented with the other conservative justices, writing that the Supreme Court “should remand the case for a new trial and additional fact finding under the appropriate legal standards.”
Collins, the last New England Republican in Congress, is seeking a fifth term in the Senate in a state that then-GOP presidential nominee Donald Trump lost in 2016 by 3 points. Her moderate reputation has consistently put her in the middle of major debates in Washington. But her votes for Kavanaugh, who was confirmed with the minimum 50 votes in the Senate, and against the Republican effort to repeal the Affordable Care Act have put her in a tough spot with both Democrats and Republicans. Collins has repeatedly refused to say if she is backing Trump’s reelection bid.
She was in the spotlight again in the aftermath of the court’s decision. Collins campaign spokesman Kevin Kelley said that the senator agreed with it.
“To suggest that Justice Kavanaugh’s dissent in this particular case is a vote to outlaw abortion is absurd and not based in fact,” Kelley said. “As Justice Gorsuch wrote, ‘In truth, Roe v. Wade is not even at issue here.’ “
“The bottom line is that she has always believed in a woman’s right to choose and nothing about today’s decision changes the law,” he added.

One in four teachers at greater risk from coronavirus

Terms of Michael Cohen’s return to prison under scrutiny

Trump confirms US conducted cyberattack against Russia in 2018